DANGER in the Don.

I can't even believe this, it's so evil.

Someone has purposefully sabotaged bridges in the Don Valley in order to hurt riders doing their thing. If you, like me, enjoy the skinnies, beware. I hope the person(s) responsible are caught and for their sake, I hope they're caught by the authorities, if you know what I mean.

Canadian Cyclist has more information. From their story:

"Bridge was cut partially through in Four places and appeared undamaged from
above. The fall from this Bridge is Nine to 16 Ft, depending on which side you
fell from!!!" 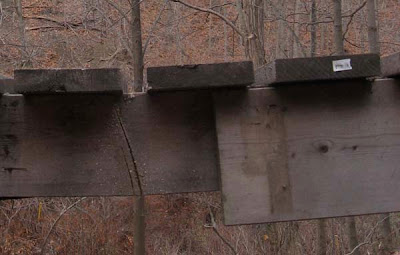 This morning I checked the email I reserve for "junk" like pharmaceutical marvels, mail-order university degrees and social media updates to find something I considered definitely NOT junk.

My heart raced as I scanned the subject line: StevePeat is now following you on Twitter. 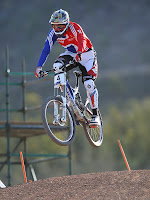 Steve Peat. "Peaty". World Champion. People's Champion. And consistently my favourite part in mountain bike videos that get me through every winter on the lonely trainer. (I can't tell you how it warms my heart to spin along with him at the start of his part in "Seasons".)

That's when the truth of the notification landed with a thud.

Turns out, it wasn't @StevePeat following me. It was @StevePeatDH and I was so excited, I saw what I wanted to see, skipping over those last two crucial letters. I stared at my screen as the realization sunk in. (philosophical sidebar: does someone who has a fastest-man-in-the-world jersey hanging in his closet really follow anyone?)

The silver lining is, although I'm still a total stranger to the greatest downhiller in the world (and I'm not sure him following me on twitter would change that fact all that much ...), he DID put out an app for iphone/ipad/ipod touch. Rad. It's always good news when the sport gets more positive exposure because that means maybe more people will get out there and try it (and then become addicts like the rest of us).
To close, may I suggest that if you're on twitter on this lovely Friday, you #ff @StevePeatDH and of course the man himself, @StevePeat.

Posted by Unknown at 8:41 AM No comments:

Saw this today on a blog featured on the right nav. Everybody loves a bit with a dog!
Posted by Unknown at 1:03 PM No comments:

In honour of all the blogs, tweets and facebook posts I've seen welcoming the snowy season, I've decided to take the green, summery theme you've grown to know and love and replace with the more timely theme of winter, mountains and thoughts of skiing/riding (the other kind) that it provokes.

Hope you like the new background, colours and header photo. The photo is a view of Seagrams, in Whistler back country. G took it last season and I love it.

The Headwinds of Lakeshore Boulevard

Just when you think you're a superstar, you turn around and realize you've been riding with a tailwind. Ah, that sinking feeling.

But the croissants were worth it. Mission Accomplished.
Posted by Unknown at 6:42 AM No comments:

So I have a new toy ... and I've filled it up with all kinds of wonderful things. Now it seems like everytime I do a workout I've got some anonymous internet-types (and a few people I actually know) to tell! And in a variety of different mediums!

My boss was kind enough to bring in his "Nike+" gizmos so I can connect with all the runners out there. That fits into my iPod but also spurred me to look up the Nike+ app for iPhone and I found out it does all kinds of neat things ... apparently even Lance Armstrong has been known to show up on your workout (well .. in your earphones) to encourage you before cueing up the next "power s 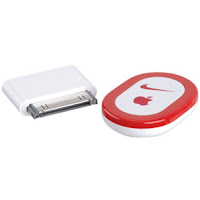 ong". What?! I'm ready to hit the pavement just to see what Lance says!

Then there's this "iFitness" thing I downloaded that shows you different workouts for the limb/core area of your choice with just one tap of the finger. But you can also log your daily weight and it tells you all about your BMI (which means nothing to me but apparently I'm "normal" anyway).

I also log on to "Daily Mile" (which you can access via the donut on the left nav) to share some workouts and spy on the other runners and cyclists in my life (or at least the five of them also on Daily Mile).

Then there's Garmin connect that goes with my other favourite gadget, my Edge 705.

With all these options for posting, I can see how you might wonder when I'll actually have time to do the training I'll report on.

Sometimes, and I'm sure all of us who spend long hours getting ready for the next season know what I'm talking about ... sometimes you just need a new toy to trick yourself into getting the work done. It's still early for fooling myself, but there's lots of time yet for more apps, more gear, perhaps a new sport and all the other accoutrements of life as an "endor-fiend"*.

*See Gerhard's feature, "Science of the Stoke" in the tech issue of Snowboard Canada to find out more about endor-fiends ... a great subject for a later blog!!
Posted by Unknown at 4:01 PM 1 comment: Let the snow fly so the Sunday night missions to Blue can commence!

Anybody else have their pass? Early Bird prices have been extended to Nov 7. Still a couple days left.

Posted by Unknown at 1:16 PM No comments: