Interbike only lasts a few days but since those days are mostly spent without fresh air or natural light, it's easy to lose count. Especially since it all becomes a blur of shiny bits, objects of desire, and tremendous innovations cyclists didn't even know they needed.

I spent the better part of the week (one day at Outdoor Demo and three at Interbike) covering the show for both Teton Gravity Research and mtbr.com/roadbikereview.com.

And here's what I saw! Below, you'll find all of my articles and "best of" lists in one place - hope you enjoy! I certainly enjoyed chasing them down. BIG thank you to TGR's Jon Grinney who snapped photos for me and kept up with my warp speed charge. And more thank yous to all the gang at MTBR and Road Bike Review for having me along as well. 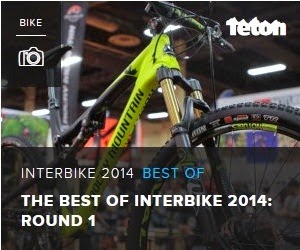 The first installment of the TGR "Best of" series includes some of my favs from Rocky Mountain, Giant, POC, Smith, Giro, Osprey, and Sony:  http://www.tetongravity.com/photo/bike/the-best-of-interbike-2014-round-1 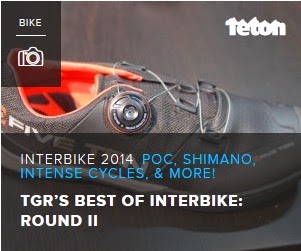 In Round II, I tried to get a little more "enduro" on the whole thing (and DH too!) and included finds from  Shimano, Five Ten, Camelback, EVOC, SPY, Leatt, and Intense Cycles.
http://www.tetongravity.com/photo/bike/tgrs-best-of-interbike-round-ii

For the MTBR/RBR "Best of Show" round up, I highlight the new lady's version of Norco's Sight, a pack from EVOC, Giro's Halter Bib Shorts, and the first helmet from Leatt (complete with internal routing for your hydration tube!)
http://reviews.mtbr.com/best-in-show-30-cool-new-bike-products-for-2015

Acre's Trail Pack is a good looking, functional pack that'll be here this spring. Fun aside, while in their booth, I got to meet legends Steve Peat and Greg Minnaar -- a highlight! http://reviews.mtbr.com/interbike-acre-hauser-trailpack

Blackburn has got a rack for you if you're of the fat-biking persuasion. And good news: it will also fit your skinny bike.
http://reviews.mtbr.com/interbike-blackburns-new-expandable-outpost-fat-bike-rack

Marin offers an affordable option in the "adventure bike" category that caught my eye. http://www.roadbikereview.com/reviews/interbike-marin-lombard-elite-adventure-road-bike

Though they didn't have a traditional booth set up on the show floor, Mavic did have a nice, quiet place to retreat to to check out their hoops and other offerings. I took a peak at the Crossmax XL Wheel-Tyre System. http://reviews.mtbr.com/interbike-mavic-crossmax-xl-wheel-tyre-system

Liv, Giant's new women's brand is all grown up in 2015, dropping "Giant" from its extremely light downtubes. I drooled all over the Liv Lust Advanced 0. http://reviews.mtbr.com/interbike-2015-liv-lust-advanced-0

I met Jill Hamilton, the industry veteran behind Petal Power - a new line of "down there" products that work as a system including pre-ride wipes, chamois "creme" and post-ride wash. http://www.roadbikereview.com/reviews/interbike-petal-powers-new-chamois-cream-system-for-women

Simple, affordable and it gets the bikes out of the way! Great new offering from Feedback that would look great in a garage or even in your front hall. http://www.roadbikereview.com/reviews/interbike-feedback-sports-velo-wall-post-storage-solution

Showers Pass had the right idea when they booked a suite at the Mandalay in which to show off their gear. Another welcome retreat from the show floor. Also bacon. Ladies: the Rogue Hoodie. http://www.roadbikereview.com/reviews/interbike-showers-pass-launches-rogue-hoodie-for-women

And if you read this far ... here's a special treat. With MTBR/RoadBikeReview, we put together these entertaining, informative video wrap-ups to share with you the kinds of chats we have at the end of the day, anyway. I think they turned out alright!

Hope you enjoyed the show!!!
Posted by Unknown at 1:59 PM No comments:

Interbike!! Are you going?

I'm just putting the finishing touches on all the arrangements to head to Las Vegas for Interbike 2014, the largest bicycle tradeshow in North America.

I’ll be visiting with booths at Outdoor Demo on Tuesday and then retreating to the air-conditioned tradeshow floor of the Mandalay for three days of Interbike.

I’m on the hunt for the latest and greatest in mountain biking, and will be sharing the results of my detective work via Teton Gravity Research, so stay tuned!

I’m also looking forward to catching up with friends, sponsors and clients from the past year and showing off some spiffy new business cards, thanks to LiFT Creative - the team behind this year's Belgian Huis. If you’re planning to be at the show, let’s connect!

Safe travels to everyone as you start making your way to Vegas! We're leaving on Friday for a "quick detour" to Tahoe to catch the Jeremy Jones: Higher premiere. Stoked!