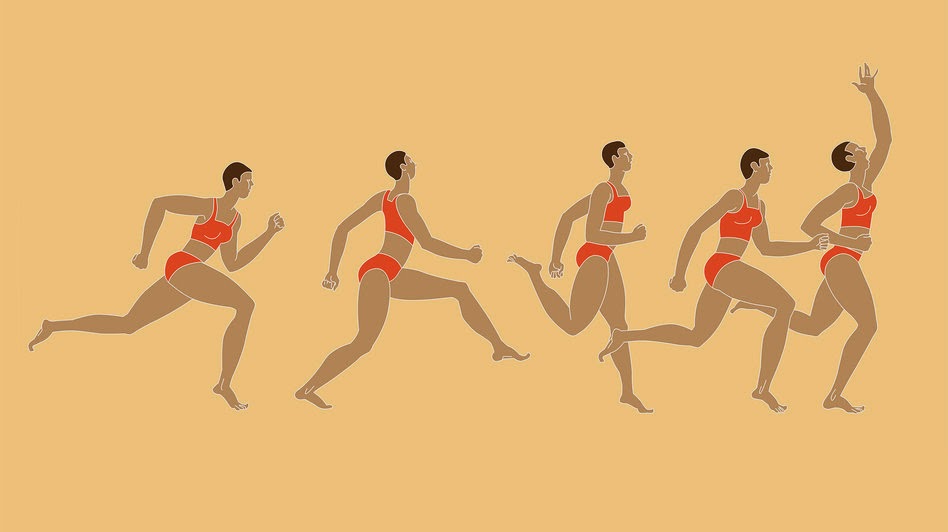 Great segment, NPR! Loved this Ted Radio Hour on Champions, and as I continue to ride the narrow ridge between positive thinking and pity party while my hand heals, your timing couldn't be better.

Hope everyone takes 60 minutes to listen to this inspiring piece on "Champions." As NPR puts it:


"From Little League to the Olympics, athletic mastery plays a major role in our sense of achievement. This hour, TED speakers explore the minds and bodies of champions who achieve extraordinary feats."


Two weeks ago today was the crash, so that's about time for a [short] update!

1) The scaphoid survived! So I got to bust out of the cast and cut down my recovery time
2) I am now up to typing with seven fingers
3) It's "just a little break" so healing should be uncomplicated
4) Gerhard is getting really good at pony tails
5) As of today, I seem to have made it to a world without constant pain

1) Reflexes are the devil: dropped (and caught) a bottle the other day and almost cried bloody murder
2) My braking/shifting/hanging-on digits are still out of commission ... so no racing or riding in sight (unless it's on the trainer)
3) I can only type with seven fingers

Since the day I signed up a year ago, i have done something every day to get ready for the BC Bike Race. i was already starting to feel sad for this goal's exit from my life since it has all been so rewarding and i've met so many great people along the way. especially the ninjas!

so on the bright side, the goal has not exited from my life. we are leaning towards making a return campaign for 2015 and though i'm very sad 2014 did not turn out at all as planned, i'm already excited to use the lessons i've learned and another year of training to make 2015 even better.

it's hard for me to type so i'll keep this short but here's my version of events.

I woke up day 3 feeling a bit flat and decided to give myself permission to just do as the body wanted as the juices started flowing (or not flowing, depending). i did an abbreviated version of my daily warm up then got into the gates. i managed to sneak up a bit to grab a better position off the line since on the opening climbs, i was making good time. and wouldn't you know it, fitness kicked in and not even five minutes off the gun, i was ready to rock. had an awesome climb to the singletrack and then found a great group of kiwis to ride with.

til this day, singletrack was making me a bit trepidatious. so steep and gnarly, i was wondering if i was a mtb-er afterall. but powell river was my course. i passed a lot of people in the start wave ahead of me and i wasn't losing any time in the trails either. my bike was perfect for the terrain, and i was in that shit-eating grin state of mind. i was gleefully licking my lips at the results sheet i was confident would see me move up the standings.

our group began swallowing some riders off the back of the group ahead and it was my turn to find a chance to pass. the rider up asked if i'd like by and so i looked up to assess my answer. i was in the middle of saying not yet, i'll let you know when my front wheel found a wet root hiding in the loam. it happened so fast i had no choice but to accept a tumble. but on the way down, i saw my crash zone was already occupied by a large, hard tree stump. i knew my head was in danger and my hand came out reflexively to protect my face. it got stuck on some part of the stump or a branch ... not sure, but ......warning: cringe worthy ....... i felt all of my fingers fold back on my hand and get stuck there while my head continued its -- now slower -- trajectory to the stump. i head butted it ever so softly, but i knew it was at the expense of broken bones.

fortunately, i had the good sense to crash in front of a doctor. thank you so much Ian for your optimism, and initial exam. once rider patrol caught up, we let Ian go to carry on his race. and i tried to ride out. strike one: i couldn't get my index finger to brake. who needs your rear brake anyway? i thought. strike two was shifting. i like this gear anyway, i told myself. but strike three? i could no longer climb, so i tearfully had to let my bcbr go for this year. when i made it close to the road, i was met by the med team who are amazing, paramedics, trauma docs and mtb lovers. they were willing to let me continue, to their credit, fully understanding that its hard for any racer to give up the ghost. with a steep enduro to come, and strong broken bones suspicions, i figured i would just get something else broken. you can't imagine how hard it is to get in the waiting pick up. true empathizers, they had a cup of scotch waiting for me too.

then it was off to the hospital. xrays. fractures to metacarpal (across the joint, sadly) and scaphoid. cast applied to keep it immobilized until they can xray again in ten days. full damage will/should be visible then. probably off the bike for awhile, which is a bummer because i also just got my usac pro upgrade.

the support team has been amazing and at first i was really sad i'd let them down, but when i needed them more than ever they were/are here and now we get to spend more time together anyway. would love to share more ... especially thank yous to the race, the crew, Team Kris and everyone who has sent messages but i'm still getting used to being a lefty so that's all for now.