This explains Raw Food better than I ever could - and in a RAP no less. Check it out. Sergei Boutenko who is the ... uh ... talent in this number is Victoria Boutenko's son.

She writes about Sergei and the rest of her family's experience and life and death motivation to start on raw food. It's the book I recommend you pick up first if you have any interest in raw food at all, whether it's to lose weight, stay healthy or have more energy. It's called 12 Steps to Raw Food.
Posted by Unknown at 2:53 PM No comments: 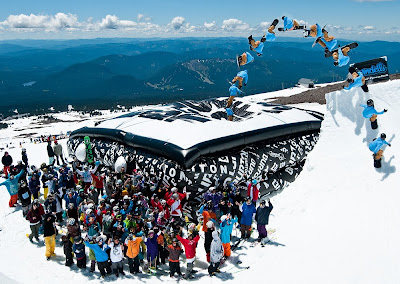 Family Day was a few days ago now but the short week has kept work piled high and I haven't had time to tell you about ... *drumroll please* ... the ACROBAG.
We went up to Beaver Valley Ski Club as guests of a prominent member who shall remain nameless and as luck would have it, Acrobag was there as well, and open to the public.
All day as we rode the chairlifts, we could see all kinds of people -- young, old, ski racers, snowboard kids, their parents and coaches -- lined up to tuck full speed into a ten foot tombstone jump, launching themselves way high into the air and executing tricks from back flips, to big spins to just straight airs.

And the best part -- landing softly every time on a 50x50 inflated cloud.

THAT is the beauty of the acrobag. It takes the fear out of air time. Natch, I had to try it. I mustered the courage to hit it twice before I decided I'd better cut out of the line before delusions of grandeur had me attempting stuff I had no business attempting -- acrobag or not.

Moral of the story: if you are on the slopes and you see one of these bad boys, get in line!! You can't go wrong

PS: here's another good use of the acrobag ... 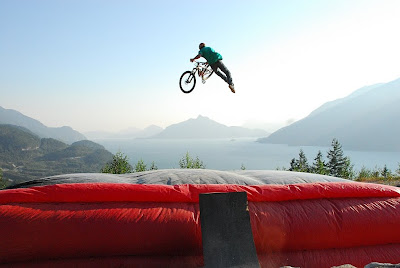 Posted by Unknown at 6:42 AM No comments:

Email ThisBlogThis!Share to TwitterShare to FacebookShare to Pinterest
Labels: acrobag 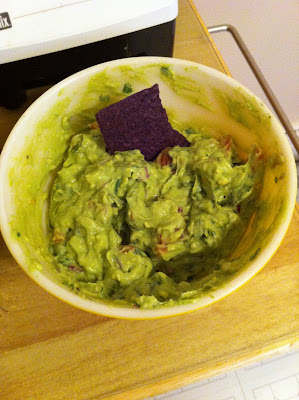 If you want some, here's how to make your own:

Get the avocado meat out of its skin and mash it all up in a medium sized bowl. You can do this with a fork -- no need for fancy tools.

Once you've got them smoothed out, throw in the remaining ingredients, add tortillas and you're done.

Keep it Raw:
Instead of chips, consider enjoying it on fresh romaine boats to keep it living (and to avoid the stomach upset that sometimes comes with too many corn chips).

Also, sometimes when I'm feeling the guac craving, I throw the ingredients in with some greens (spinach is good) and call it guacamole salad. Really it's the cilantro that makes it sing. (Just chop the avocado instead of mashing it ... yeah I know you knew that.)

*Avocados almost NEVER come ready to go from the store. Leave them in your fruit bowl, ideally besides some bananas or apples (for their ripening off-gases) for a couple days and then put them in the fridge to keep them until you need them. But don't wait too long because there's nothing sadder than a rotten avocado when you thought you were about to enjoy some guacamole ...
Posted by Unknown at 10:51 AM No comments:

Email ThisBlogThis!Share to TwitterShare to FacebookShare to Pinterest
Labels: recipes 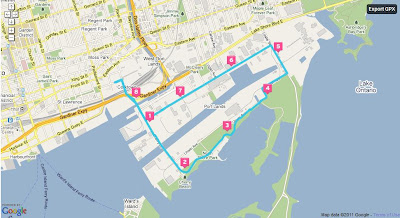 You may have noticed the widgets on my side bar, or the occasional tweet or facebook update concerning DailyMile. If this is the first you've heard of it, basically it's an online training log with social media layered over top. Well today, my dailymile "friends" and I thought we'd meet up offline and in-person. 9am, Distillery District running about 8km down Cherry Street and across the waterfront to Leslie, then back along Commissioners. It's a familiar route for speedwork on the bike, but on foot it seemed all new again.

I'm all for workouts in groups. But I've never been on a group run before so I was kind of nervous. I shouldn't have been -- everyone was amazingly friendly, and to my surprise, I was able to keep a pretty great pace (at least according to the voice in my ear buds ... I think he was saying 5:11 or 5:13 most of the time). I was even running at the FRONT of the pack. Woo hoo!

The one downer was that the weather was kind of unfriendly with its wind and snow. Especially compared to yesterday's random tropical interruption. But once we got started it really wasn't that bad. That will make me think twice the next time I say "it's too cold to go out".

Afterwards, we continued our socializing at Fig's on Queen for brunch. I had my first waffle in ages and learned that my fellow dailymilers included IT whizzes (i learned so much about my iPhone it was embarrassing), fashion designers, english majors and ex-navy seals. It was a great morning on all counts.

Thanks everyone for an awesome time!
Posted by Unknown at 9:52 AM No comments: 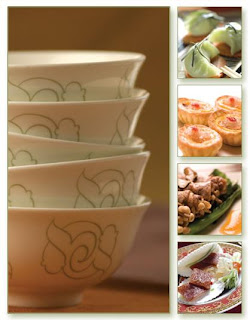 Looking forward to dinner with my Birthday Boy at Lai Wah Heen tonight. It's going to be a geographically-influenced gastronomic adventure. Even with exciting menu items like swallow's nest, pork belly, jellyfish and shark fins I'm just not sure I can say no to my favourite Chinese Food dishes. Num num. By the way, I thought I was against Shark Fin Soup, but sharks have been jerks lately, so maybe I'll have some just for spite. (I'm being totally facecious; I'm still very much against Shark Fin Soup).
Anyway, a birthday party is a great start to Family Day Weekend! Hope everyone has a good one! tgiLWf

PS: did you know G shares a birthday with John Travolta, Yoko Ono and John Hughes? Pretty much mandatory that we watch 16 Candles at some point this weekend, I think.

Posted by Unknown at 1:11 PM No comments:

Won't you come to dinner? Here are your options! Once you've made your selection, let me know and I will make a reservation for the date of your choice. 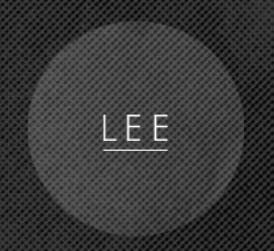 A coleslaw with no less than 17 perfect ingredients is just the beginning of a pan-Asian tapas style evening with every kind of flavour. Presented by celebrity chef, Susur Lee.

A blend of Toronto's cosmopolitan, with Parisian tradition. And home of the four-tier seafood "Tower of Power."

You've seen it in the movies? Heard about it in foodie circles? Well now it's here: Canada's only sightless dining experience!
Posted by Unknown at 12:26 PM No comments: 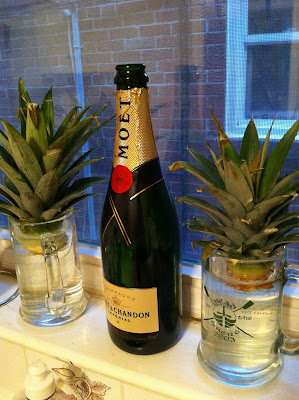 G and I are in the pineapple business!

After a conversation ages ago along the lines of "wait a minute ... where do pineapples come from?" we did some googling and found out that pineapples come from a type of plant called a "bromeliad" and in fact, the bromeliad that produces pineapples is the only bromeliad that produces any fruit at all. Even that's a stretch though because pinapple is actually a bunch of pulpy flowers all squished together in a helix that adheres to the fibonnacci sequence making it truly a "golden" (and delicious) snack.

So pictured above is step one.

You just twist the top off of a quality pineapple from your grocery store, cut off any excess fruit and remove the lower leaves from the stalk so that about an inch is exposed. Drop it into a glass of water, change for fresh H20 every few days, and in about three weeks, new roots should form!

Stay tuned and I'll update you on our next step: potting!

PS - ignore the Moet in the pic. That has nothing to do with pineapples.
Posted by Unknown at 12:13 PM No comments:

Lance Armstrong retired [again] this week. There's lots out on the wires to help you relive his most glorious triumphs, cringe-worthy crashes and inspirational activism.

Demand Media Video -- powered by livestrong.com
Posted by Unknown at 8:56 AM No comments:

The Art of Flight

Red Bull is totally raising the bar with their new movie coming September 2011. I'm only a snowboarder by proxy, so most of these trailers don't do much to turn my head. But this one has my noggin spinning exorcist style.

I love that gopher. If this week's forecast is any indication, that rodent is on to something. I predict outdoor riding in my [near] future! 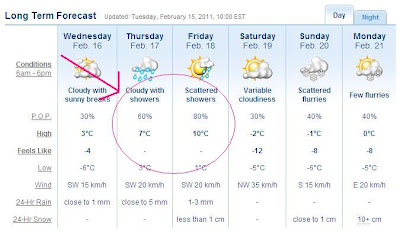 Email ThisBlogThis!Share to TwitterShare to FacebookShare to Pinterest
Labels: weather

Put to the test

Big night in Base Camp spinning group! 20 minute test night. Glad to put another one of those behind me! The hardest part of a fitness test such as this is the anticipation. All day I was dreading those few sufferable minutes and it's never the hell we think it's going to be.

Tonight though I think I was saved because with less than an hour before class I got an email asking if I would step in as instructor!! Daffyd our regular leader was delayed at the office. So even though I've never led a spinning class before I agreed to help out. In comparison to the unknown territory of "Spin Instructor", a 20 minute test all of a sudden seemd like small potatoes.

It's funny because although I write speeches for a living, public speaking is so not one of my favourite things. And in spinning class, riding bikes is only half of it. You also have to be someone your spinners can rely on to talk enough that the time doesn't drag on, but at the same time, you can't talk too much.

And not to mention everybody is looking at you while you sweat.

Anyway, I made it through it all, and actually enjoyed it too, so maybe there's an oppotunity there that I hadn't thought of before.

Much respect to our regular instructor Daffyd who makes all that look easy. I'll think twice before I chirp about time keeping or ask him to repeat the workout (again) from now on. Perspective!

I'm kind of bonking at this point, so I think that means the test went well. Although I don't think it's doing much for this blog post. So I'll cut this off here, and take my tired body to bed, satisfied with both the evening's performances.
Posted by Unknown at 8:22 PM No comments:

May The Force Be With You

"Your motivation today," said the email containing this image. 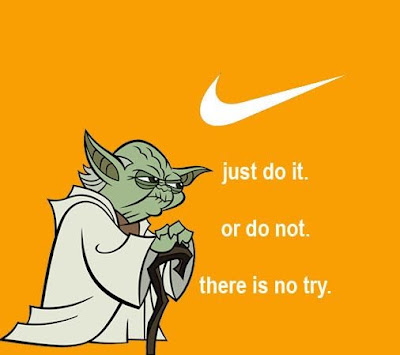 After a late night and hectic morning, this was my response. ;) 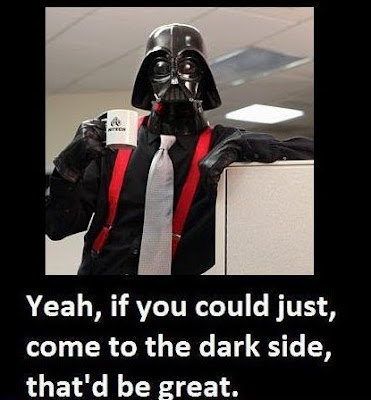 Posted by Unknown at 8:30 AM No comments:

The girl downstairs is having a party.

I have spinning in less than 8 hours.

The music is loud, the doors are slamming, and voices are raised.

Please let them go to the bar soon.
Posted by Unknown at 8:12 PM No comments: