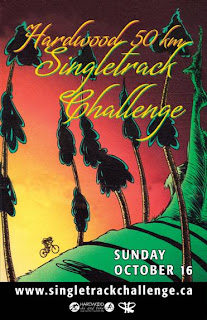 What better way to spend a sunny, fall day than mountain biking for more than four hours in a row on a course that's 98% singletrack?
This was my first visit to the new-ish fall event held at Hardwood Hills. It was also my first time on a mountain bike -- or doing anything remotely resembling healthy physical activity -- since the 24-Hour back in August. The Ontario general election sucked up every ounce of oxygen between then and now so I was really not sure what to expect on race day.
Kind of added to the fun, to be honest.
So, surprise! Legs felt okay, handling was better than I expected even with the slick roots and mucky leaves but wow. Kids, don't let your cardio go. My chest felt like it was clamped in a vice.
Then I realized my under-layer was perhaps a little too constricting. It was a last minute addition and truth be told it was actually just a bandeau but I thought it would help keep my core warm. I don't recommend this. By the end of the second lap, "Radical", I was having a hard time feeling my feet -- not so radical. So I took a break trail-side and removed the offending garment and it felt SO GOOD, the relief almost made it worthwhile. (Reminds me of a quote I like to use: "So what's racing feel like?" "Like hitting yourself with a hammer non-stop for two hours" "Then why do you do it?" "Because it feels so good when you stop!").
Once that was sorted out, and blood could once again travel freely between my torso and the "engine room" (my legs), we were off for the final three loops. Sean Ruppel of Chico Racing fame was my riding buddy for the day and if he hadn't been there I probably would have quit, so thanks Sean. While I struggled with mountain-biking skills level 1, he was clearing tough climbs and obstacles on a single speed 29er while still having the time to leisurely chat with the other racers, answer texts, fix broken chains, remove dead-falls from the course and even at least three nature breaks. I felt like a shadow of my racing self. Sigh.
But I finished it! I think I was the 5th woman overall, and 2nd in my category which meant that for all my suffering I was duly awarded a snazzy plaque and I even snagged a doorprize as well -- a handy nacho bowl, chips and two kinds of delicious salsa which for sure I will be eating tonight for dinner because I am too tired and sore to even consider walking to the grocery store.
It will be a sad little meal in comparison to the post-race repast Adam Ruppel and his lovely wife Jen made for us over in Uxbridge last night. A boisterous dinner party of seven sharing Jen's most-amazing-ever short-ribs and other Thai cuisine was the perfect end to a great day of riding (even though the "racing" left something to be desired.) So thanks to them once again!
PS Next time you see Adam (aka Chico), ask him to tell you about his ghostly encounters. I'll be getting over those spooky tales for a few more nights to come.
Posted by Unknown at 9:55 AM No comments: