For Canada Day, we were back at the finish line in Sechelt, which was now the start line for Day 4. Somewhere on Day 3, the BC Bike Race surpassed the Belgian Waffle Ride for the honors of "hardest thing ever," and I remember thinking, wow, I can't believe we're only a hair over the halfway mark. Therefore by Day 4, I was definitely well into my daily morning whine of “I’m really tired,” so I was in need of an extra energy boost.

Just as I was feeling a little dubious about my capabilities, we got to enjoy the most uplifting rendition of “Oh Canada” by one of the ladies from Obsession: Bikes. It brought goosebumps. That was followed by a Sasquatch ripping a guitar solo so really, anything can happen at BCBR. Stoke restored.

I figured since Day 4 was another A to B course, we would have a similar experience as the day before – plenty of fireroad connectors and long climbs to look forward to. I was wrong to assume. Day 4 snuck up to the top of my list of “favorites” in the bunch thanks to its healthy dose of tight, twisty singletrack featuring rocks, roots and flow. I kept waiting for those “Death Marches” up gravel roads, and they never really came. So. Much. Single track.

Oh wait, there was one stand-out climb. I had run out of water as well which just added to its endearing qualities. Luckily, Tippie and a full cab of BCBR Crew came by and thus, this moment will always be remembered as that time I sucked on Tippie's hydration pack hose, while he held it out a moving truck window, while we climbed up up up. The Thunderbolt loved the climbs, but it really shone on the grand finale ...

The end of the climb (and day) was an insane near-9km descent through some of the most fun singletrack of the week. It was the kind of thing that makes you feel like Princess Leia on Endor. Just insane. Though it was quite technical at times, Thunderbolt and I stayed upright, though I saw plenty of people toppling over off of bridges and ridges. My only complaint of the day was that I was not mentally prepared to really find that extra shredtacular gear, and therefore traffic was a bit intimidating.

Once we got to the bike park (!) I found my flow (hard to miss!) and had a good rip through trails I probably would have thought twice about dropping just a few days before. BCBR has the added benefit of making you a better bike rider. Adapt or die. 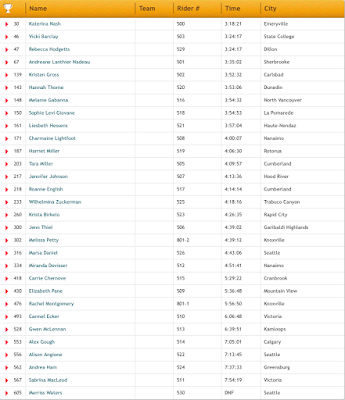 I crossed the line with a huge grin on my face (and sore hands!), sweaty, dusty, and happy in 5th place. I was so happy to have a support crew that day as well because the race ended at the Langdale ferry terminal on the tarmac, but I just went and hid in the RV with the AC on, sleeping off the heat, and emerging only for a quick bite of gelato, and a pep talk about mental toughness with Alex Deibold. Thanks mom, and Olympians! 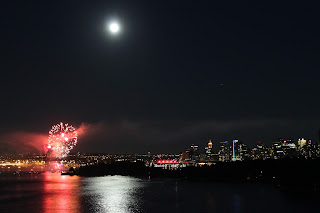 On the ferry, I got some more interviewsdone for Bike Mag, hunted down Margus Riga (who I had been ambushing every day with my "subject du jour" demanding portraits), and even did an interview with Tippie where I was answering questions instead of asking them (which hopefully will never air anywhere because I was a tired, babbling wreck). And then we were off to North Van, where I had to get a little work done with the my new friend Nathan and the other amazing health pros that travel with the race. Knee/leg/back were holding on ... but only barely. Once I was restored as best we could, it was back home to bed, and ready to race Day 5, which had definitely been on my mind. Mom, Dad and Gerhard hiked up to the Lions Gate Bridge and watched the fireworks but I was saving whatever "pop" I had left for the course.


Day 4: Sechelt to Lansdale Presented by Ryders Eyewear from BC Bike Race on Vimeo.