The night before this one, I had to make a stop at the rehab tent where I had the occasion to meet Nathan, the race's physical therapist, who is amazing. Quickly, all the work I had done with Dr. Hagner seemed to be coming unraveled which was both half-expected and maximum depressing. At this point, I still had the idea of DNF looming in my mind because while I wanted to finish this thing so badly I'd already done so almost every night in my dreams, I also didn't want to rip apart an achilles or blow out a knee to do it. 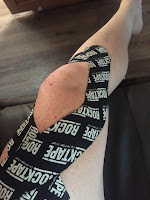 Nathan made sure nothing was tearing, and helped to unlock some of the muscles that were having their tug of war and then helped my system out with some strategic taping that was like a miracle in how well it worked. Later, I was walking by the area again and my old friend Dr. Colin (Wilson) stopped me (he had been witness to all the aftermath of my debacle last year, AND had consulted with Nathan as to why I was hanging around the med area again) and did a drive-by adjustment on a couple of things which instantly made me feel better. At the BC Bike Race, you feel like a queen in how well they take care of you, and it's so clear how much everyone wants you to get to the end. I love it.

So with renewed faith and hope, I headed to bed (after pounding out some words for Bike Mag in one of the nicer "offices" I've ever had the pleasure to work in).

Powell River is where my race ended last year (review that sad story here and here)--so this was my return to the scene of the crime. I didn’t think I had a problem with it though because I knew what went wrong  and how to make sure it didn’t go wrong again. But I was surprised to find I couldn’t shake the thoughts of what happened.

It felt like every root and tree was out to get me and that caused me to ride very cautiously. Like, I was a total road block in the singletrack.  I was still strong on the climbs so I made time there, but lost it again once we narrowed up through the trees and those darn roots had me all tense and sketchy. I was passed by two of the women in my field, and couldn't do a thing about it, so I came in 7th that day. I was bummed about the result, but also really happy to have made it to the end of the stage. It was one of the best and surreal feelings of my week to NOT be sitting at the (albeit lovely) Powell River Hospital. It felt like I got away with something. 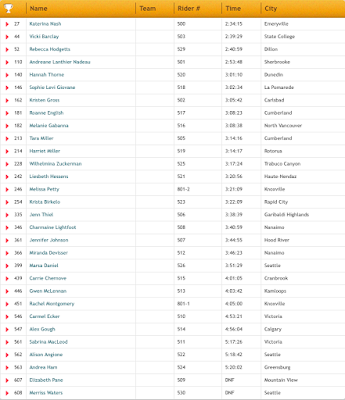 By the way, the stage was a pretty brutal one as well, made slightly more gentle by the amazing people of Powell River who upped the ante on their ferry-boat welcome by lining the trails in costume and high spirits to cheer us on -- even in places that sure felt pretty darn remote!! Vive Powell River. Their encouragement was welcome, as there was much more pedaling required over very bumpy terrain so it took it out of you, both mind and body (with special call out to hands). There was a long “flat” section that was a full-body experience that had racers fighting for every inch. And the bridges, which were awesome (especially the one featuring hula dancers and an amazing corkscrew trail construction) often had railings that were exactly as wide as my Thunderbolt's 760mm bars. Tight squeeze!

A year ago, I was thinking the entire time about walking tired, hot quads into the cold ocean but never got the chance since I had to detour to the hospital. This year, my prize was I got to wade out into the water. I was feeling pretty overwhelmed (like, a tear or two) standing there. Even though it wasn’t my best result, it was the best result. Take that, demons.

Meanwhile, the boys had gone fishing with Captain Dean (again), and although they didn’t catch anything, Captain Dean wasn’t going to let them go empty handed so we had some fresh salmon on the BBQ for dinner. A perfect evening spent with the Gross-Lake clan. Night's like that make you grateful to have the support of family in your crazy adventures, especially thinking back to a very different salmon dinner just a year ago. Onward!!

For my Bike Mag coverage of Day 2 (with awesome photos as well as interviews with the Tent City boss, Pup, and Olympic snowboarding bronze medalist Alex Deibold) head over here.